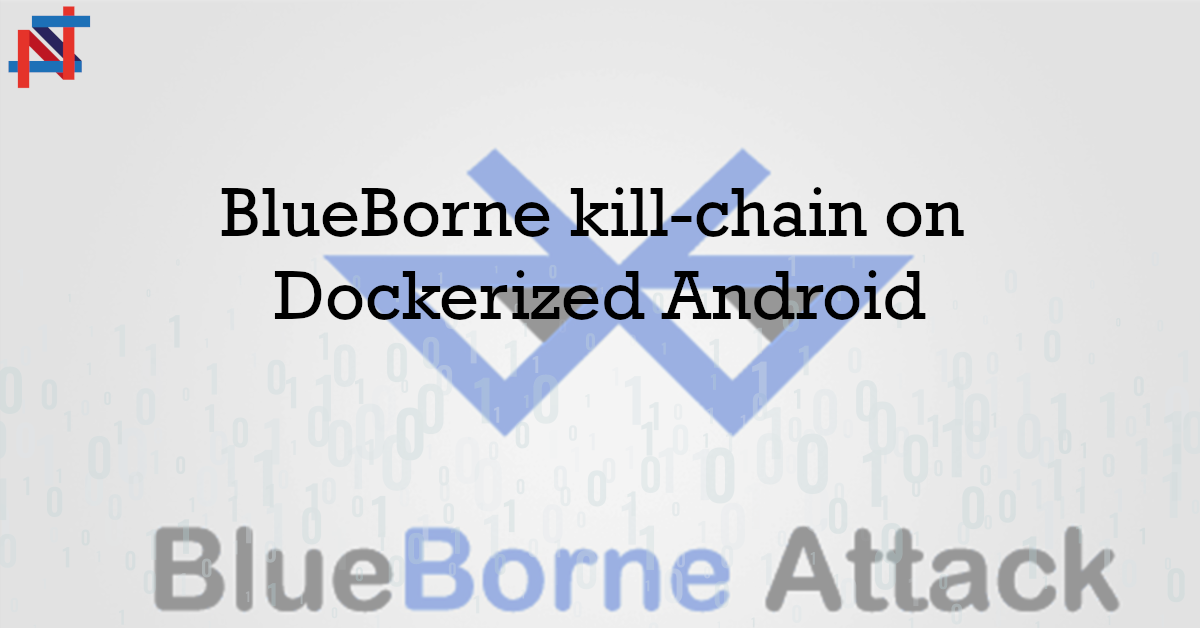 Attacks on any device have become increasingly complex: attackers often string together multiple vulnerabilities in a chain of attacks that can cause devastating effects by requiring little user interaction. The main goals of this post are essentially two: first, we will do a general overview of the various phases of a cyber kill-chain and the exploit we will use later; second, we will go to show how it was possible to reproduce the whole attack on Dockerized Android.

In 2011, in this paper, seven steps that make up a cyber kill-chain were identified:

These seven steps can be grouped into three phases:

The term “BlueBorne” refers to multiple security vulnerabilities related to the implementation of Bluetooth. These vulnerabilities were discovered by a group of researchers from Armis Security, an IoT security company, in September 2017.  According to Armis, the BlueBorne attack vector affected aroun 8.2 billion devices at the time of discovery. It affects the Bluetooth implementations in Android, iOS, Microsoft and Linux, impacting almost all Bluetooth device types such as smartphones, laptops, smartwatches, etc. Ben Seri and Gregor Vishnepolsk analyzed BlueBorne in detail in this paper. There are eight different vulnerabilities that can be used as part of the attack vector:

NOTE: In the following sections we are going to focus on the reproduction on Dockerized Android without talking about the RCE or the information leakage in detail. You can read the paper mentioned above for details.

Before going into the core of the implementation it is important to describe the PoC presented by Armis researchers.

The original exploit put together the two vulnerabilities listed above and consisted of two phases:

In particular, the attacker in the first phase of the attack needs to derive the base address of two libraries:

The PoC presented by Armis researches had a series of offsets that must be set in the code before running and these offsets change every time the Bluetooth process restarts. For this reason, to run this PoC, it was necessary to have root privileges to find the correct offsets every time. In our implementation, we solved this problem.

This paragraph highlights the requirements to reproduce the kill-chain:

As for the type of device, it is impossible to execute this kill-chain on an Android Emulator since it has limited integration with the hardware.

The following figure shows the high-level steps to reproduce the exploit chain:

As you can see, there are a lot of phases and tools that are involved, almost all of them can be put into a container to form a big docker-compose.yml that allows you to put the whole kill-chain together. Unfortunately, there are some things like the creation of a fake application (Fake Spotify) and the Reverse engineering phase that has to be done out-of-band. Let’s move forward and explain this flow step by step.

This is an extremely important part and is the one that allows to turn the Armis PoC into a kill-chain (as we said before we needed a root access to find the offsets to run the PoC). To get the correct offsets, we are going to use the function address inference technique we described in this post. Therefore, we are going to use the Information Leakage CVE to bypass ASLR protection. To do this, we need to analyze libc.so and bluetooth.default.so libraries out-of-band in order to perform function address inference, but how do we get those libraries from the target victim device? The solution we provide (but there could be thousands of alternative approaches) is:

In the first step, we need to send a phishing email to the victim (in this case one that contains a link to a malicious apk). For this purpose we used Gophish, a powerful open-source framework: This is the phishing mail we created, yes we love Mr Robot.

Once the victim downloads the APK and runs it, the attacker receives:

From the attacker’s point of view, the second step of the exploit chain consists of analyzing the information received from the target. The victim, misled by the phishing email, sends information about their device to the attacker. To correctly configure the offsets needed for the function address inference the attacker must perform reverse engineering operations since he must disassemble these two libraries.

NOTE: We tested this mechanism on a Huawei P9 Lite and a Xiaomi Redmi 2, running Android 6.0.

Using Ghidra, it is possible to disassemble the two files that the attacker received from the victim and statically set these offsets in the code:

With the procedures explained above, the attacker manages to bypass the ASLR of the target device. As repeated several times already, this was possible thanks to CVE-2017-0785, which causes an information leak. In order to penetrate the device, in this second phase, we use CVE-2017- 0781 RCE exploit. The goal is to obtain a remote shell from which to control the device. For this purpose, the payload is the following:

This payload needs to be placed in a deterministic memory location: this is why the attacker uses the name of his Bluetooth device. In fact, during the establishment of the Bluetooth ACL connection (the layer below L2CAP), this name is exchanged with the victim device. Here is how the Delivery phase unfolds. As mentioned earlier, whenever the vulnerable call to memcpy is reached, there is a corruption of the heap that generates “holes”. Therefore, the attacker’s goal is to generate a buffer overflow to have the payload executed on the target device.

NOTE: The phases 1 to 5 are very long to setup and are added only to make the kill-chain more realistic. You can easily skip them since the only thing done is the upload of some files. You can simply adb pull them and start with the reverse engineering.

As we said before it is impossible to reproduce all the above stages on Docker (the reverse engineering phase). However, to reproduce only the execution of the kill-chain on a specific device, we implemented the following docker-compose:

There are five different services in this file:

It was necessary to split attacker-blueborne and attacker-webserver since the former requires network_mode equal to “host” (because the Bluetooth of the host machine is required to run the exploit).

You can get the source code to run everything from our GitHub repo here (you will find also some useful tips on how to set everything up). Anyway, if something goes sideways you can always open an issue.